About Waterworks: Who We Are

Waterworks has had the opportunity to complete multiple projects worldwide since 1985 for Fortune 500 companies and other regional companies/contractors. The skills and abilities of the Waterworks team have been demonstrated on a wide range of projects. 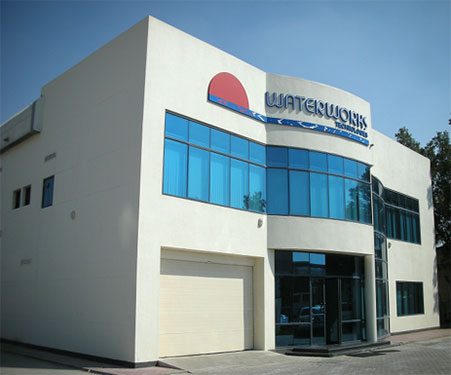 As a global company, Waterworks has successfully completed hundreds of projects in various countries & regions around the world including Canada, UAE, Oman, Qatar, Bahrain, Saudi Arabia, Egypt, Iraq, Turkey, Mexico, Nigeria, India, Malaysia and many more. Waterworks has supplied systems to a wide range of clients which have in turn lead to multiple opportunities working with international giants such as US Army Corps of Engineers, Johnson & Johnson, Pepsi America, Coca Cola, ATCO, GE Energy, Kellogg Brown & Root, Amec, ARAMCO and many other prominent companies. Waterworks maintains a core staff of dedicated engineering professionals offering a wide range of pre-engineered and custom design solutions, while continuing to invest in the research and development of new processes, adaptations or improvements of existing processes.

Waterworks is a leading environmental engineering company based in Calgary, Canada. Waterworks was incorporated in 1985 and has maintained an ever expanding global presence with subsidiary offices in Dubai, Cyprus, Malaysia, India, Egypt, USA, Saudi Arabia and Afghanistan. Waterworks specializes in custom designed systems that combine several technologies to provide solutions for any water or wastewater treatment needed, such as:

About Waterworks: What We Do

Waterworks has had the opportunity to complete multiple projects worldwide since 1985 for Fortune 500 companies and other regional companies/contractors. The skills and abilities of the Waterworks team have been demonstrated on a wide range of projects such as:

Waterworks has had the opportunity to complete multiple projects worldwide since 1985. The skills and abilities of the Waterworks team have been demonstrated on a wide range of projects such as:

As a global company, Waterworks has constructed facilities all over world including:

Adsorption
Separation of liquids, gases, colloids or suspended matter from a medium by adherence to the surface or pores of a solid.

A measure of the amount of oxygen required to neutralize organic wastes.

The amount of oxygen (measured in mg/L) that is consumed in the oxidation of organic and oxidasable inorganic matter, under test conditions. It is used to measure the total amount of organic and inorganic pollution in wastewater. Contrary to BOD, with COD practically all compounds are fully oxidized.

Conductivity
The amount of electricity the water can conduct. It is expressed in a chemical magnitude. Please use also our information about TDS and conductivity.

Dewater
The separation of water from sludge, to produce a solid cake.

DAF
Dissolved Air Flotation A procedure of induced flotation with very fine air bubbles or 'micro bubbles', of 40 to 70 microns.

Dissolved oxygen
The amount of oxygen dissolved in water at a certain time, expressed in ppm mg/L.

Effluent
The outlet or outflow of any system that deals with water flows, for an oxidation pond for biological water purification. It is the product water of the given system.

Filter medium
The permeable material that separates solids from liquids passing through it.

Heavy metals
Metals that have a density of 5.0 or higher and a high elemental weight. Most are toxic to humans, even in low concentrations.

MCL Maximum Contaminant Level
Solids material that totally dissolves in water and can be removed by means of filtration.

Osmosis
Water molecules passing through membranes naturally, to the side with the highest concentration of dissolved impurities.

Potable water
Solids material that totally dissolves in water and can be removed by means of filtration.

Pre-treatment
Processes used to reduce or eliminate wastewater pollutants from before they are discharged.

Raw water
Intake water before any treatment or use.

Reverse Osmosis process
The reverse osmosis (RO) process uses a semi-permeable membrane to separate and remove dissolved solids, organics, pyrogens, submicron colloidal matter, viruses, and bacteria from water. The process is called 'reverse' osmosis since it requires pressure to force pure water across a membrane, leaving the impurities behind.

Secondary treatment
The removal or reduction of contaminants and BOD of effluent from primary wastewater treatment.

Suspended solids
Solid organic or inorganic particles that are held in suspension in a solution.

Tertiary treatment
Advanced cleaning of wastewater that goes beyond the secondary or biological stage, removing nutrients such as phosphorus, nitrogen, and most BOD and suspended solids.

TDS Total Dissolved Solids.
The weight per unit volume of water of suspended solids in a filter media after filtration or evaporation. Please use also our information about TDS and conductivity.

TH
Total hardness. The sum of calcium and magnesium hardness, expressed as a calcium carbonate equivalent.

TS
Total solids - the weight of all present solids per unit volume of water. It is usually determined by evaporation. The total weight concerns both dissolved and suspended organic and inorganic matter.

Total solids
All the solids in wastewater or sewage water, including suspended solids and filterable solids.

Trickling filter
A wastewater treatment unit that contains medium material with bacteria. The stream of wastewater is trickled over the medium and the bacteria break down the organic wastes. Bacteria are collected on the filter medium.

Turbidity
A measure of non-transparency of water due to the presence of suspended matter.

UV
Ultraviolet - rRadiation that has a wavelength shorter than visible light. It is often used to kill bacteria and destroy ozone.

Wastewater
The spent or used water from a home, community, farm, or industry that contains dissolved or suspended matter.